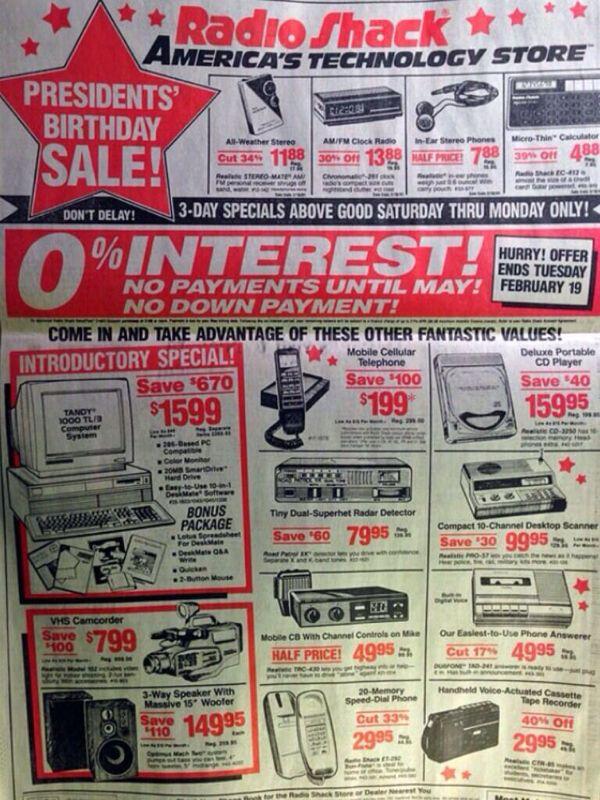 This image of a 1991 Radio Shack flyer has been making the social media rounds this week, pointing out that nearly everything on that list can now be done from a smartphone. It shouldn’t really surprise us; 1991 was 23 years ago after all. However for people in their 20’s and 30’s it represents a meaningful divide from that era to the present.

As new devices emerge, we have a tendency to gush about their new design or features without stepping back and looking at the big picture. How will this product change the development in and outside of its immediate industry? A common mistake is to say that the iPhone changed the phone industry; because it did so much more than that. It is more challenging, but important to identify products outside of the phone industry that the iPhone eliminated.

The next industry that is about to be put out of business is that of television & living room accessories. It is not unusual to walk into someone’s living room and see an entertainment system comprised of:

The television will remain, and although the aesthetic will evolve, the concept of having a large screen on which to view entertainment is going to last. Physical media however, is already near dead so the DVD player has no future. Cable/Satellite is about to be consumed by the internet which will lead to an era where content is delivered through WiFi instead of a coaxial cable from the wall; a development will remove the need for those boxes. The Apple TV, Google Chromecast, and Roku all attempt to make a regular TV “smarter” by adding app-driven features, however this is really a stopgap until smart-TV prices come down. The functions these add-ons offer will be at the core of a smart-TV experience.

Gaming consoles may be the last to do away with, however it is only a matter of time until Microsoft and Sony integrate the operating systems of their consoles with that of their own smart-TV offerings. Televisions are about to become powerful computing devices and gaming will be included very naturally.

An important factor to consider is how closely related the various products connected to the modern TV are. There is a great deal of crossover between modern living room products. How many devices connected to your TV offer an app to watching Netflix or HBO Go? It will take relatively little time to concentrate these capabilities in one place. As the world depends more and more upon the internet as a common ground for development, it makes merging products easier.

The iPhone merged decades of different products into a single device. Going forward, grand unification of technologies is going to get easier and faster because they already have so much in common. Smart-TVs are in their infancy but it isn’t hard to see that their potential is to make each of those accessories extinct.