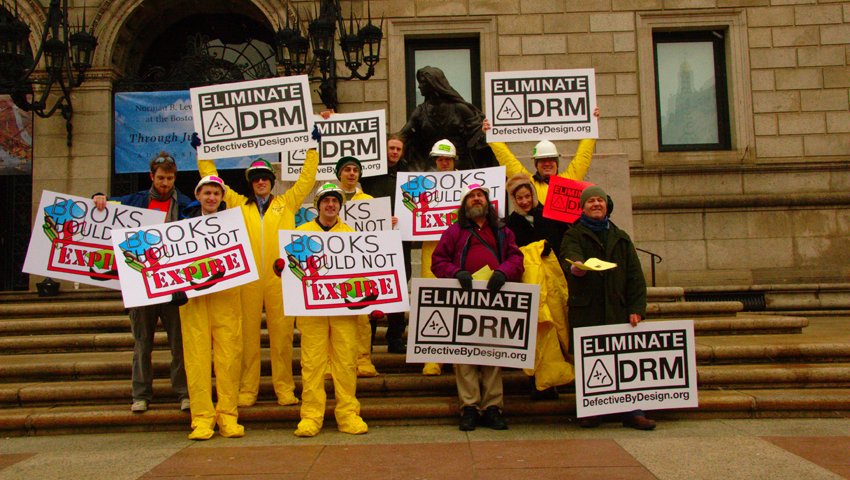 Digital Rights Management is a method used to control a product after the sale. An example is iTunes, which places DRM in its files so that they only play on devices made by Apple and registered by the purchaser.

In principle, DRM sounds like a good way to protect intellectual property. However in practice, the barriers it puts up often cause problems even for people who legally purchased the content in the first place. I, like many people, have gone to the Pirate Bay to download files for content which I already own just so I can use them in a manner not supported by the content’s seller.

For example, I once bought a film via iTunes. At the time, I was heavily using my Apple TV and didn’t think about compatibility issues down the road. Recently, I thought I might like to watch that film on my Android tablet while traveling. The movie will not play on my tablet because Apple refuses to provide compatibility for their content on non-Apple devices. The issue forced me to illegally download a non-DRM version, just so I could play it on my preferred device.

If you had bought a VHS tape, there was no way to prevent you from playing it. There was no one trying to stop you from going to your friend’s house and playing it there as well. If you got tired of that tape, you could sell it or give it away, and there was no one claiming you infringed on their rights as the content creator.

DRM software has made it possible for vendors to trap consumers within their ecosystem. If you were an early adopter of the iPhone, it is possible for you to have upwards of $50 worth of apps, and hundreds of dollars worth of books, music, TV shows, and movies on your account. Even if an Android phone is better than the new iPhone, you may simply feel it isn’t worth losing all that you have built up over the years to make the switch.

DRM is being used primarily now for anti-competitive purposes despite the repeated claims by those using it that they need it to protect intellectual property.

Piracy is an Availability and Pricing Problem

In a recommendation to the Australian Government, Google warns that draconian anti-piracy measures could prove counterproductive. Instead, the Government should promote new business models. “There is significant, credible evidence emerging that online piracy is primarily an availability and pricing problem,” Google states.
TorrentFreak

The best example of Google’s point about availability is HBO’s hit show Game of Thrones. HBO does not make the show available worldwide at the same time. This means that there is a huge audience that is not being served when the content is initially released. In the days after a new episode airs, the show consistently tops the charts for most illegally downloaded file. These are often people who would pay for it, or may already have an HBO account however the content they want isn’t being made available to them.

Region-specific blocks and DRM are causing people to turn to piracy, not preventing it. The single easiest way to prevent piracy would be a business model which released content through a globally accessible online store, for a fair price, without any DRM restrictions.

The popular personal coffee maker, Keurig, will be using a form of DRM in upcoming machines. These machines will not allow k-cups from unapproved vendors to work with the machine. Therefore, only official partners of Keurig will have their coffee brewed.

Third-party pod refills that often retail for 5-25% less than what Keurig charges. As people look to cut costs, there has also been a growing market for reusable pods that generally run anywhere from five to fifteen dollars.
TechDirt

Kuerig is locking out companies that would save you money, and that is anti-competitive. How far are we going to allow this to go? Would you buy an oven that only cooked products which partnered with its manufacturer? Would you buy a dishwasher that only washed approved dishes?

We have to prevent DRM from gaining more ground. It is a process which makes our society less open and competitive. Consumers have shown repeatedly that they want choices. A system which restricts choice and traps consumers in a hole that only serves a single vendor is bad.

Support the open source community and vendors who value the spirit of innovation and competition.

On an earnings call Wednesday the company announced that brewer sales fell 12 percent last quarter, the first full quarter for which the 2.0 was on sale.
The Verge

Consumer reviews have been very negative for the latest Keurig machines with DRM, and between negativity and confusion over compatibility, consumers are staying away from the new machines.

In response to a 23% decline in sales of brewers and brewing accessories, Keurig President and CEO Brian Kelley had the following to say:

I would tell you the other thing we heard loud and clear from the consumer, while a very small percent of consumers, a very vocal and intense, passionate consumer who really wanted the My K-cup back, what we learned is… that we want consumers to be able to brew every brand, any brand of coffee in their machine and bringing the My K-cup back allows that. We took the My K-cup away and quite honestly we’re wrong.
Keurig President and CEO Brian Kelley via Ars Technica