Previously, I wrote about my experience at HBO’s: Game of Thrones Epic Fan Experience. I argued that HBO hurt themselves by not allowing attendees to use their smartphones at the event and that their fear of the episode being pirated should have been outweighed by the surge of positive publicity that their fans could have generated had they been able to tweet, take photos, and share their experience. So how do those statements hold up after the premiere?

For HBO, it was a big night; they reached 6.6 million viewers, the most since The Sopranos finale in 2007. HBO managed to do this despite their streaming service, HBO GO, failing to work. The same problem that occurred during last month’s finale of True Detective. The error likely contributed to the high number of people seeking the illegal copy of the episode.

Due to HBO’s cable subscription requirement, pricing, and limited overseas availability: Game of Thrones was the most pirated show of 2013. Surely season 4 will rise to the top of the charts after it debuts on April 6th, so HBO is trying to keep it under-wraps until then.

Early data gathered by TorrentFreak shows that Season 4, Episode 1 is breaking records for illegal downloads. In the first 12 hours after it became available, the episode had over 1 million downloads and over 300,000 people simultaneously sharing the file.

Game of Thrones is a global phenomenon, and as a result it is also a global distribution problem. Below is TorrentFreak’s breakdown of where the illegal downloads were coming from. 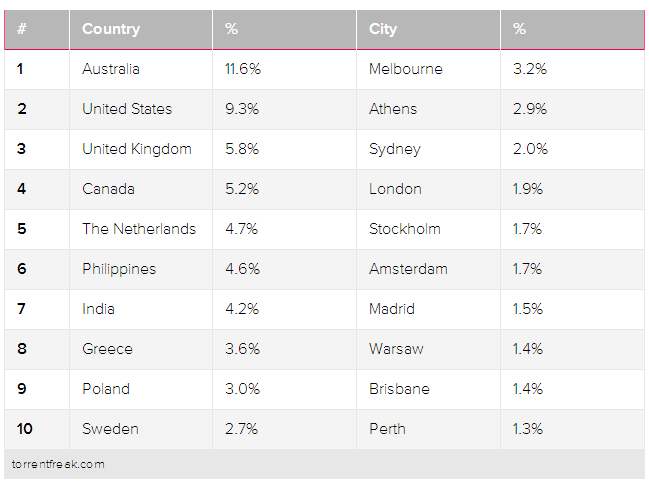 Once again, we can see that a huge percentage of piracy can be drawn back to one of these two problems. HBO is not a truly global service, which means that people all over the world do not have the option to watch it legally, and for those who do, pricing is not always reasonable. We live in a global culture, and when a culturally significant phenomenon (such as Game of Thrones) occurs, people will want to be a part of it. It is the responsibility of content distributors to make it available. HBO has only themselves to blame for the high rates of piracy and for their own streaming service failing users.

Returning to the original question, was it worth it for HBO to ban smartphones from their fan experience just so that a smartphone-filmed version of the first episode didn’t end up online 2 weeks ago? I still argue no, and that the high rates of piracy show that their true problem is that they aren’t serving their fans adequately through their existing distribution model.

The cable model is dying. Entertainment distribution needs to be done through (reliable) online streaming that offers anyone with an internet connection the ability to watch content at a reasonable price. That is the only method which will allow the world the chance to experience great content while giving them the fewest possible reasons to feel a need to pirate the material.