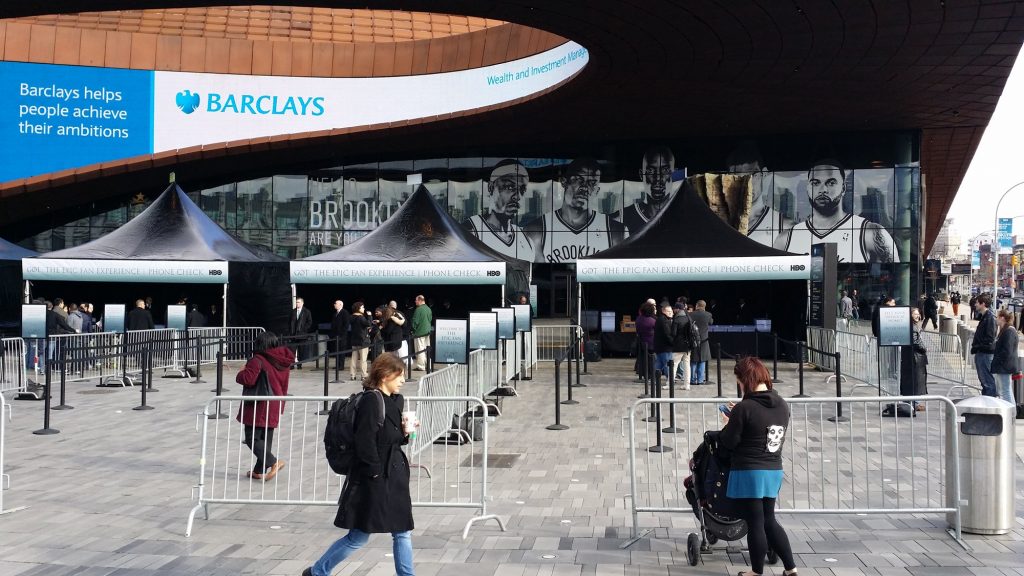 On March 20, I attended HBO’s Game of Thrones Epic Fan Experience at the Barclay’s Center in Brooklyn. The purpose of the event was to celebrate the debut of the new season with activities for fans and attendees got to see the first episode of the upcoming season (which was great). Upon arriving outside of the Arena, I was met with the “Phone Check” tents (pictured above). The prerequisite for entry was that all attendees hand over their smartphones and any other recording equipment.

Quite obviously, HBO was concerned that someone would record the episode and post it online for others to see. Due to HBO’s cable subscription requirement, pricing, and limited overseas availability: Game of Thrones was the most pirated show of 2013. Surely season 4 will rise to the top of the charts after it debuts on April 6th, so HBO is trying to keep it under-wraps until then.

However, the trade-off they made was to eliminate the ability for thousands of their biggest fans to tweet, take photos, send texts, and in general promote Game of Thrones, HBO, and the amazing time they were having in the moment. What should be worth more to HBO: preventing the show from appearing on torrent sites 2 weeks early or allowing your most dedicated fans the ability to share their experience with their followers? I emphasize “in the moment” because the way people do those actions after the event lacks much of the enthusiasm, context, and energy that they had hours before. In my case, I never ended up tweeting or posting about the event at all despite having an awesome and memorable time. For me, it just felt forced to do anything later that night and I had no pictures to share from inside.

I think HBO made the wrong call. The type of person who would want to see the episode early is the same person as their biggest fan. Someone who has never seen the show before isn’t going to watch a pirated version of season 4 ep. 1. The only people who would want to watch it are people who are already enormous fans of the program, follow the show, and just want more of it as soon as possible! HBO isn’t losing any subscribers just because an episode leaks early.

Our experience is that it leads to more paying subs. I think you’re right that Game of Thrones is the most pirated show in the world. That’s better than an Emmy.
Jeff Bewkes, CEO of HBO’s Parent Company, Time Warner

How can HBO exec’s seemingly understand the role piracy plays in their business model and yet miss the mark at such a big live event?

I question how enforceable such policies will be in the future. Already there are cameras on some smart-watches and Google Glass (and other eyeglass competitors) are coming as well. Is a venue going to be able to seize all the cameras going through their doors? What happens when someone’s prescription glasses also happen to be augmented with a camera? Recording equipment is going to be so heavily integrated into our lives that it isn’t realistic to expect such bans to be possible to keep up.

Aside from the logistical issue, I hope that Hollywood comes to a more rational perspective about the role piracy plays. Companies need to ask themselves what they really gain by going to extraordinary lengths to prevent leaks. Ultimately, the bulk of piracy is avoidable if companies move into the internet age and make their content available in a globally accessible format.