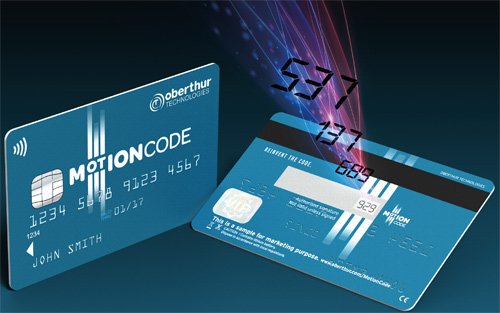 French security company Oberthur Technologies has released Motion Code™: a chip credit card with a security code which, unlike traditional cards, changes every hour for 3 years.

Credit cards have always relied upon a very traditional form of security with a serial number on the front which functions as a username and a security code (password) on the back. If your card’s data was stolen, those numbers, along with your name and the card’s expiration date, could be sold or passed along to those looking to commit theft. All of the information needed to make an online payment is printed on the card and entered into websites.

Fraud is increasingly shifting to “card-not-present” (CNP) transactions carried out mainly online due to the rise of e-commerce around the world. It represents 65% of the total card fraud.
Oberthur Technologies

The Motion Code™ increases security dramatically by adding a modern 2-Factor Authentication (2FA) tactic to the physical card. By changing the security code randomly, every hour, for the duration of the card’s lifetime, the card is of little value to someone looking to sell the data because the data would need to be used within the hour in which it was recorded.

This technology should provide peace-of-mind to consumers often reluctant to shop online for fears of credit card theft.

We’re also seeing some interesting stats around the increased likelihood of people to transact online with this card and we’re seeing spending increases as a result.
Aaron Davis, Business Director of Oberthur Technologies UK & Ireland, The Memo

I maintain that fully-digital solutions are the future of payments, through virtual currencies and heavily secured payment portals; however until we get there, cards like the Motion Code™ are going to prevent theft and keep consumers safer.

Technology like this should be available from your bank in the next few years, and I suggest trying to upgrade to these cards as soon as they become available to you. In many technology sectors there is no need to be an early adopter, however, when it comes to security it is worth making the effort to stay current. Criminals target those with the weakest security, so by keeping ahead of the rest, you have a much higher expectation of safety.