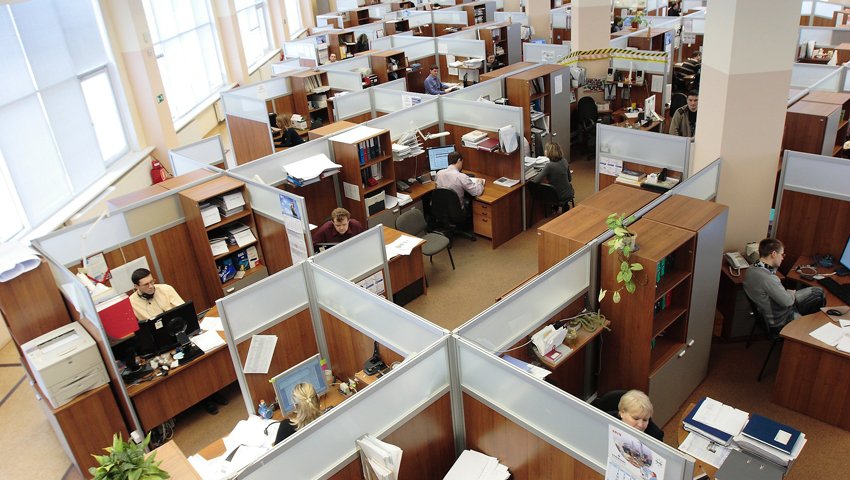 Donald Trump is President-Elect of the United States of America. The exit polling indicates that people are dissatisfied with the current government and America is not on the right track. Trump spent much of the campaign hammering the role foreign trade has on the U.S. job market while promising to create jobs for Americans.

The problem with that claim is technologists expect the 21st century to be the era of mass-unemployment. Promising to give people jobs in an era where unemployment is expected to trend up significantly is dangerous. Whether Trump knowingly misled voters or genuinely believed he could deliver on that promise isn’t for me to say. However it is vital that politicians start a conversation with the public about what a world without jobs should look like. The future is coming with or without their consent or preparation.

Automation will cut through the American workforce in a way that most people don’t expect. Too often, especially among the college-educated, there is a perception that the robots are coming for the jobs which are lowest on the economic totem pole. This isn’t just an over-simplification, it’s wrong.

Artificial Intelligence (AI) is often better than people at jobs which are:

Some low-income jobs will be automated, however, most of the jobs that are most immediately at risk are white-collar jobs which require a college degree.

We are a long way away from “General AI”, the sort of all-knowing, human-like robots from the movies. But task-focused AI, like IBM’s Watson, will be able to accomplish many tasks far more quickly and completely than whole teams of people can today.

Keep in mind that automation is, from a business perspective, about running more efficiently. That means doing more with less financial expense or liability. For most of the fields discussed below, that doesn’t mean eliminating the entire profession, but automating as many tasks as possible, then using a much smaller team of people within that field to do the left-over work that the software cannot yet do. The human workforce is (and has always been) an ever-shrinking need to cover tasks which machines are not yet capable of.

Below is a chart from Business Insider using data from a 2014 piece in the Economist. 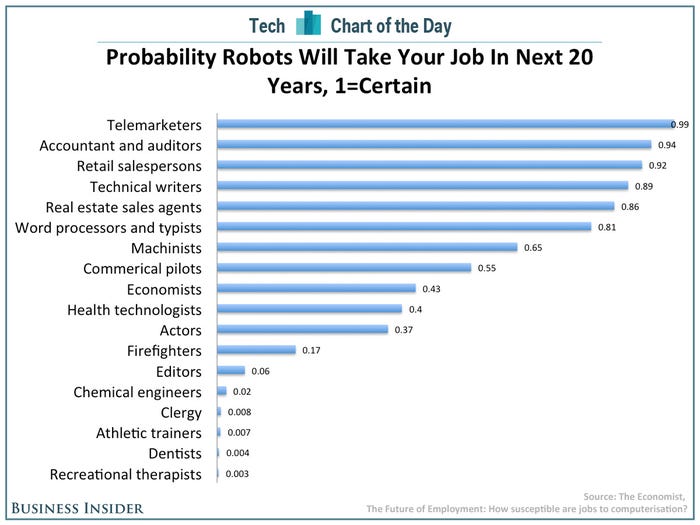 I’ve added some of my own expectations, by industry, to those projections:

The big picture is that it doesn’t matter that some jobs have traditionally been perceived as higher-tier than others. Automation isn’t working its way from bottom to top of the pay-scale. Some doctors are more at risk than most nurses and physical therapists. Some lawyers and accountants are more at risk than the janitor who cleans their offices.

As you can see, I think the earliest impact will come not from “robots”, but from software. AI is going to be more reliable and cost-effective in the near future than highly complex and expensive machines.

To those people who say “A robot couldn’t do by job.”, I ask: How much of your job could an AI do? With each passing year that that figure is likely to increase. At some point, an automated system will be able to do enough of that job, well-enough, to be trusted to relieve you of yours. 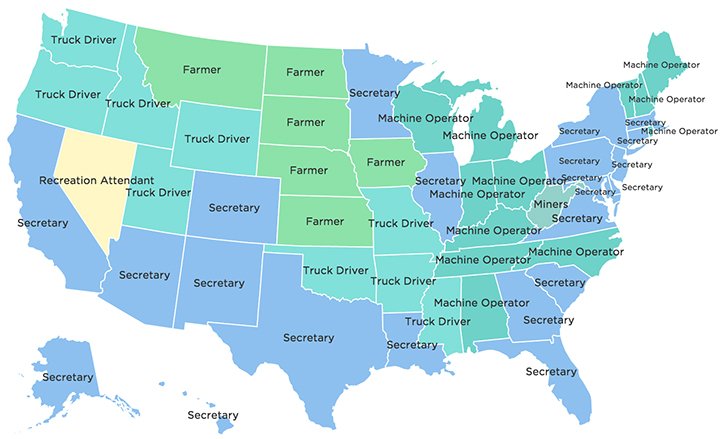 This map of the United States by NPR shows the most common job in each state as of 2014. Consider how many states are on pace to lose their #1 most common professions over the next 10 years. Truck Drivers, Secretaries, Customer Service and Retail Clerks are all high on the at-risk projections.

Donald Trump may very well find ways to add jobs over the next 4 years, but he can’t possibly be expected to change the long-term projections for the technology-caused shift in the need for many industries of work.

It is time for politicians to begin an honest conversation with the public about how we as a civilization can transition to an era with extremely high unemployment or underemployment.

The key problems facing us as unemployment rises:

Our society has steep challenges ahead and if our politicians hold-off on having honest discourse with the public, then we may reach a point where it is too late to get ahead of the looming problems. Someone is going to have to take the face the criticism of delivering an unpopular message, but that is the hero we need. We really are on the brink of a whole new age of civilization, and it is likely to happen during your lifetime.