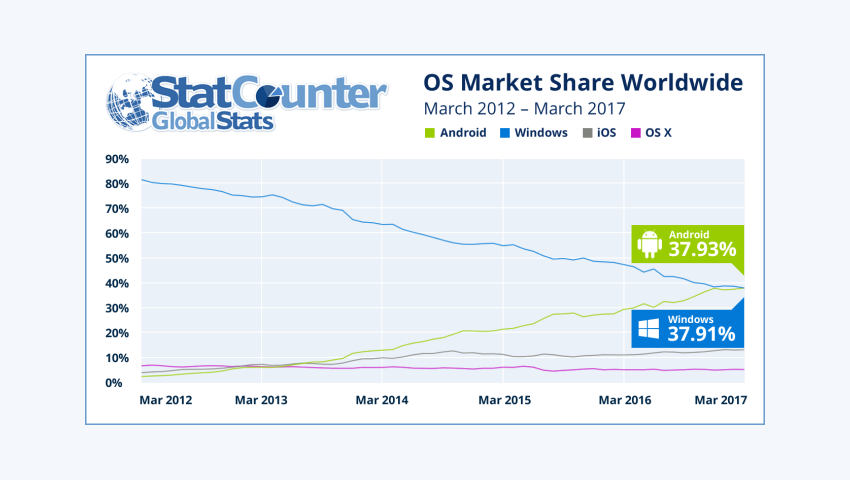 The End of an Era

March 2017 marked the first month where more web traffic came from devices running Android than Windows. According to analytics firm StatCounter, Android devices represented 37.93% of the worldwide web market share and Windows devices made up 37.91%. It is a tiny advantage, but it symbolizes a new era for the web.

It marks the end of Microsoft’s leadership worldwide of the OS market which it has held since the 1980s. It also represents a major breakthrough for Android which held just 2.4% of global internet usage share only five years ago.
Aodhan Cullen, CEO of StatCounter

In North America and Europe, web traffic still heavily comes from traditional computers (Desktops and Laptops) which overwhelmingly run Windows. In Asia, Africa, and South America however mobile usage is often far greater than that of traditional PCs. Mobile devices are cheaper and more accessible than PCs which is a leading factor behind the increased usage over other regions. There are also many areas which were never wired with traditional phone or internet cables. Suddenly, wireless phone and data services represent the first opportunity many people have ever had to get online. In many parts of the developing world, the first computer (by any modern definition) that many people have ever possessed is an Android smartphone.

In the West, we tend to have an incorrect view of the developing world’s access to technology. In some cases, traditionally poor or unstable parts of the world have leapfrogged an entire generation of technology and are now more sophisticated in some ways than the average American city. When there is a greater necessity for technological adoption, some things are not simply viewed a novelty or luxury and they more quickly become a way of life.

Lack of access to traditional computers, internet, and email has led to a boom in smartphone-based messaging services like WhatsApp. Similarly, unreliable governments with fluctuating currency values lead to widespread adoption of M-Pesa and other mobile payment platforms. Think of it this way: there are now marketplaces in Africa where every fruit and vegetable stall vendor are accepting mobile payments via smartphones. In the West, when you already have easy access to banks and credit cards and your cash maintains a stable value, it is easy to see why adopting mobile payments through your iPhone may not seem important. The vast majority of smartphone users in the U.S. have never used their phone to make a purchase at a point of sale terminal. With that in mind, it is easier to understand why mobile adoption rates are slower in those parts of the world which don’t benefit as greatly.

The era of mobile dominance is upon us. Mobile is or soon will be the #1 priority for many businesses as their customers prefer to access their content from mobile devices.

In North America, it is critical that businesses understand their audience. Throwing everything into mobile isn’t going to be the right decision for everyone. Investing in mobile-friendly websites, apps, and services can be beneficial but those decisions need to be backed by data. Start by looking to your analytics data for the mobile usage trends over the last 2 years.

Organizations typically start to see greater traffic from mobile as they build their social media networks. The more successful you are on Facebook, Twitter, and other services, the more focused you should be on prioritizing the mobile experience for your users. For some organizations who have been actively building their audiences on social media for a few years, you are already likely seeing a huge chunk of your incoming traffic from mobile thanks to your social network. For organizations looking to get started down this path, you want to make sure that your website keeps pace with your social media growth. Websites should be responsively designed to be user-friendly to all of the mobile traffic that will start to arrive as your social media audience grows.